Getting ready for out big California trip with an overnight to Carter Lake. June 16th we will start in San Francisco and bike to Los Angeles, around 550 miles.  So our trip to Carter Lake was a shakedown cruise. It was only 28 miles but with fully packed bikes it felt like more. Here is the official obligatory picture of packed bikes, like all bike tourers seem to take.
The roads North of Boulder are wide open and perfect for long bike rides. 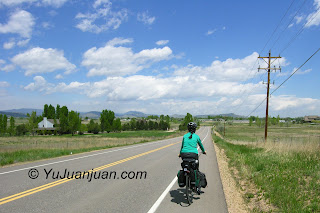 Sorry that I am not wearing real biking clothing, I tend to shun "uniforms" and I like the idea of a white shirt to keep the sun off. 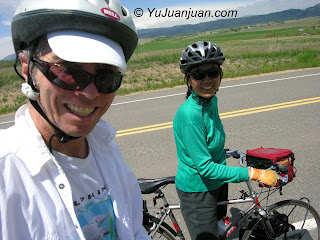 Carter Lake is above Loveland behind the first Hogback.
Very nice at almost 6,000'. 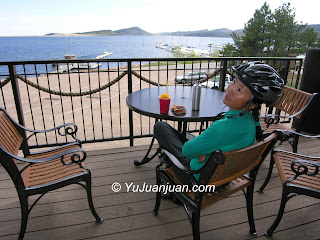 But where did I get the idea that we could find camping on Memorial Day Weekend?  All campsites had been booked 3 months in advance, if the ranger was to be believed. So the North Shore RV Park gave us a sliver of grass to park against, only $15.00.
Nice hill behind us too, 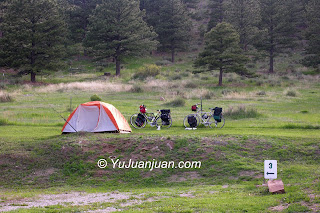 Don't let anyone tell you that photographers are not a bunch of liars.  All one has to do is take a photo from the other way and all of a sudden things look different, 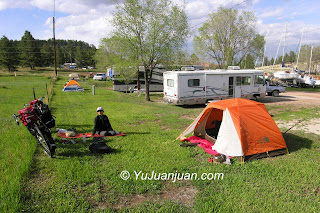 By 1AM the rain started so it was a great test of our new tent.  It and the bikes survived. 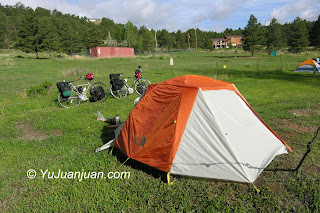 Next day ride home past a ranch that is home to a sculptor, or maybe we were transported to the Mongolian Steppes, the land certainly shares qualities with Mongolia. this statue was in the foothills before we rode out to the Plains 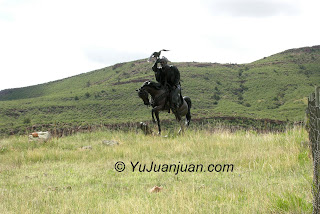 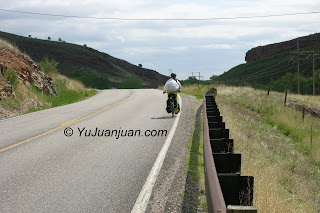 Posted by Beijingbiker at 11:05 AM No comments:

Juanjuan’s book, "The Sky is My Ceiling, the Earth is My Bed"

Yu Juanjuan is the first woman to have bicycled the entire border of China, a solo journey of more than two years and over 25,000 miles.  Juanjuan’s book, "The Sky is My Ceiling, the Earth is My Bed" is a visual memoir that recounts her 22 month true-life journey biking around China from Sept. 1987 to July 1989. Working with her husband, Photographer - Phil Wegener, Photo Editor - Paula Gillen, and Writer - Greg Bowles, she has created a photo book that documents her historic journey. The book is 152 pages, filled with stories of her adventures. and heavily illustrated with photographs taken during her trip.
"The Sky is My Ceiling, the Earth is My Bed" is a true-life story of a woman athlete overcoming every imaginable obstacle to achieve a dream.  It is also a coming of age story in post-Mao China and a personal reaction to meeting people of very different ethnicities in a country of over 1 billion people, where 92% of the population is of the Han majority. Juanjuan’s story is true adventure, the story of China and it's complicated history, and one woman's indomitable spirit.  Her book encompasses aspects of feminism, Asian studies, history and ethnography, all set within the framework of a grand adventure by bicycle.


Posted by Beijingbiker at 5:05 PM No comments:

Yu Juanjuan and her husband, professional photographer, Phil Wegener at the summit before Estes Park, Colorado.

Well, we have started to train for our big California bike trip, San Francisco to Los Angeles.  Over the weekend Juanjuan and I rode bikes from Boulder to Estes Park.  Not a big deal, just 35 miles, except for that little climb from 5,320 feet to the pass overlooking Estes Park, topping out at 7,800'. 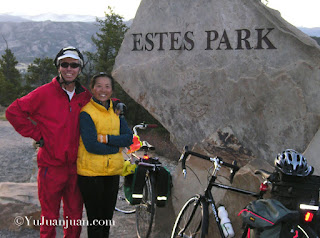 Nothing like when Juanjuan rode around China's border, that was 25,000 miles.  Her old, Chinese Gold Deer Bike had one speed and a foot brake.  Now she has a Miyata (Below) with all the best components.  My new Surly Long Haul Trucker touring bike (top right) has 27 gears and weighs less loaded than her Chinese bike did empty. 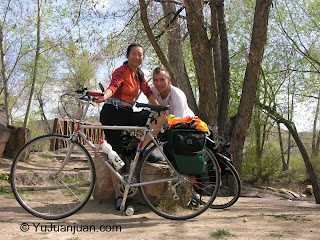 At our age, trust me, even though we have great modern bikes we still were dead tired when we got to the cabin in Estes Park. 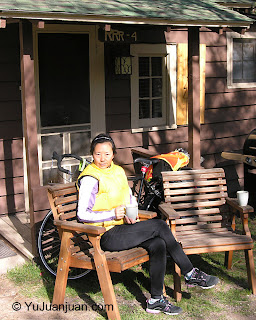 (Below) Juanjuan at home, smiling even though her muscles ache. Behind her is the statue commemorating her ride over highest continuous road in the world, in northern Tibet. She had the statue commissioned in China and shipped to Boulder. 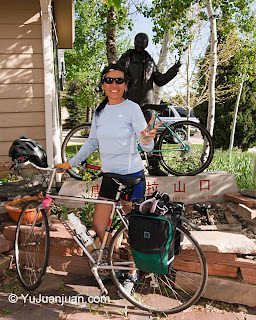 More to follow, including her history of biking in China in 1980's.
Posted by Beijingbiker at 9:17 AM 1 comment: